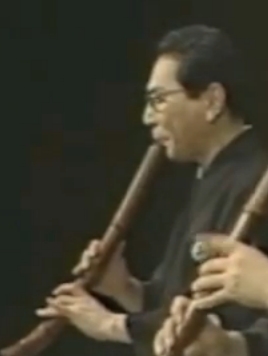 I was going to name this post The Real Lesson, but somehow that felt a little off base, so I named it after my shakuhachi flute teacher, Yamaguchi Goro. This photo is of him and Aoki Reibo playing a beautiful suizen piece, Shika No Tohne (The Distant Cry of Deer). To see this performance, see: Yamaguchi Goro Shika No Tohne.

I studied with Mr. Yamaguchi in Japan, learning as much suizen ( blowing zen one breath one mind) as I could in a few short years. He taught me well, but I must say it took decades for the ‘heart of it’ to begin to sink in. The funny thing with perfection is that it knows no end.

The reason I was going to name this post something like “The Real Lesson” was that the most important ‘lesson’ I learned while studying with him had nothing to do with playing the shakuhachi. This is one of numerous times that I have found the greatest opportunity where I least expected it.

One day my awareness really zeroed in on him as he was placing the cap on his flute. It was perfection in action, patient, deliberate, and a wonderful example of chapter 63’s, Do without doing (wéi wú wéi 为无为). More over, it was a perfect, spontaneous example of chapter 43’s, Not of words teaching, Without action advantage (不言之教，无为之益).

Interesting for me is that I also realized I had no idea if his action was actually as perfectly ‘Do without doing’ as it appeared. How could I know either way? Not only is beauty in the eye of the beholder, so also is the ‘lesson seen and learned’. Our ‘teachers’ of life are everywhere, in every-thing and no-thing, at every moment of life. The times we suspend desire and belief may well be the only true opportunities we have to learn the “Not of words teaching”. That’s when the blind spot vanishes.

Learn to blow Zen with or without a teacher or talent.
Read more...