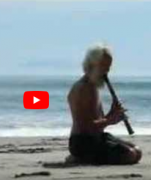 I imagine everyone is naturally both over-rigorous and under-rigorous… just in different areas, according to their natures. It is when over or under rigor causes pain for us that it becomes problematic. The pain we feel is a symptom of the loss of balance into which we have fallen. We yearn for balance, even if we don’t know it.

Needless to say, the natural limitations on humanity’s ancestral, hunter-gatherer way of life largely protected people from such extremes. Absent those, we feel an urgency to ‘fix it’. That urge to ‘fix it’ is the common denominator that politics, religion, art, education, sports, music and just about every aspect of civilization share… including and perhaps most especially, blowing Zen.

Given the rather universal urge to ‘fix it, is there any way to actually deal with this imbalance effectively. Specifically, “How do people move themselves closer to balance and more truly blow Zen?” The only possible way I know is making rigor in the moment an end in itself, detached from any specific goal. Of course, there is always some ‘goal’ in view, even if only at the autonomic nervous system level. A life-long routine practice, like yoga or blowing Zen, provides an opportunity to notice the ebb and flow of your rigor in the moment without your fleeting desirous goals stirring up trouble. That is, as soon as you get beyond any competitive goals and sink into the present.

Buddha’s 4th Noble Truth in instructive here: “There is salvation for him whose self disappears before truth, whose will is bent on what he ought to do, whose sole desire is the performance of his duty. He who is wise will enter this path and make an end to suffering“. Now I must sober up this “solution” somewhat with a disclaimer of sorts… Necessity is the Mother and an earlier post Necessity, the Mother

Does that make sense, or did I beat around the bush too much? It is a delicate issue.

Learn to blow Zen with or without a teacher or talent.
Read more...